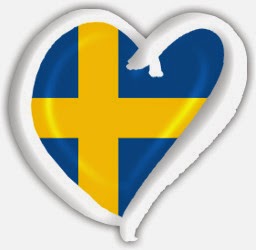 The big theme of the week seems to be the kind of chaos that can arise when things don't go as planned during a live broadcast. When nobody thought anyone could top the wonderful havoc of the German final, it seems Sweden has gone all in to make things even worse.

At least that's the feeling I get after reading about last night's dress rehearsal, dubbed by every journalist present in unison to be possibly the worst eurovision-related broadcast the SVT has made in modern times.

Seemingly the lack of scripts and the general level of filler material lead to a big crisis meeting where the creative team threw out most of the things on offer, leaving the show circa seven minutes short during the afternoon rehearsal.

I'm not sure it means anything to you, but seven minutes is an awfully long time on television. It's the live television equivalent of the time from now to Christmas. People must be sweating over this right now.

Hopefully that will a nerve to tonight's show. Because, frankly, it's not very exciting at all since half the songs on offer will make it to the final. A long, tedious show that never reaches any real climax is hardly what the audiences will be aching for at home. I wonder what the ratings will look like this week?

For me personally it is made even worse by the fact that I don't care in particular for any of the songs in the running. I'd like Behrang Miri and Kristin Amparo to be in the final, but not enough to stand up and shout for them.

But this is how I predict tonight's duels:

Linus Svenning will beat Andreas Weise thanks to his cute eyes. Neither of the songs stand out as particularly memorable, but Linus is more likeable.

Hasse Andersson will beat Kristin Amparo. The ballad might be pretty and emotional but since it failed to break through to the Swedes so far it's not likely to suddenly do so now.

Dolly Style will beat Dinah Nah. Their song is pretty awful but will get all the kid votes - and the kids use the app voting diligently - while Dinah never seems to fully go through the screen.

Samir & Viktor will eat Behrang Miri & Victor Crone alive. I still find "Groupie" exhausting on the verge of excruciating but the fan base will beat the rap by a mile, and not even using Malena Ernman as a secret weapon can change that.
Posted by TobsonHelsinki at 19:14