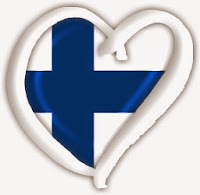 In a bit of a surprise move, Yle has decided to internally select Saara Aalto to represent Finland at the ESC in Lisbon in May. It was only partially a surprise - after three years of non-qualification and last year's very weak line-up in the national final - something had to be done.

I have been a big friend of this chosen concept for years already. As it has been hard to get big names to join in, why not have one big name do the job instead? Scrap the national final nobody wants to be a part of and find a star to send off to Eurovision.

The surprise here was more the fact that UMK 2018 seems to have been abandoned mid-season. There was already a call for songs and detailed information as how to send in entries. The call for entries opened and closed. What about the songs entered? Were they too few? Were the quality too low? Isn't it quite arrogant towards the people who actually bothered sending in their songs to Yle in the first place?

Saara Aalto was not a big surprise. People have been very fond of her - at the Yle and elsewhere - for years already and the buzz around her participation in the UK X Factor was enormous. She was the most googled person in Finland in 2016.

But is she a too obvious choice? She has a good voice and an impressive CV in many ways, but she is yet to have a commercial hit single. She hasn't released any material at all since her X Factor run and who remembers the runner-up of yesteryear anyway.

She also has an unfortunate track record of wanting too much. "No Fear" was a contender until a frantic and overloaded performance left the whole thing in ruins.

If there is somebody with a clear vision involved here, somebody knowing what a winning package could look like, then Finland could possibly go very far in Lisbon. I want to stay positive and believe the people in charge know what they are doing and that Saara can shine when needed.

What really should be done now is to drop the UMK brand. There is not a drop left of what UMK was originally intended to be and nothing in the 2018 selection process fits the description of previous editions. Retire the name and put the focus back onto Eurovision. No more blushing about it.
Posted by TobsonHelsinki at 18:51 1 comment: