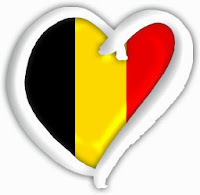 Following up Eurovision success was never particularly easy. It always took conviction and determination to be able to score well several times in a row.

And it was always extra hard for Belgium, where Flanders and Wallonia took turns to represent the country. A practise that made any kind of continuity in the selection process more or less impossible.

If RTBF for instance felt they had found a winning formula, they never had a second year to continue working on it as it was the turn of Flanders instead.

When listening through the songs that will fight it out in the Flemish final tonight on Één, I get a feeling the Flemish are trying to reproduce the same thing that RTBF got right with Roberto Bellarosa and - above all - Loïc Nottet: unleash new talent that will feel inspired and fresh in an international competition.

Unfortunately none of the five contenders remind me of Loïc at all. Instead they make me think of poor Iris who was sent off to Baku to crash and burn in the semi final there. I doubt any of tonight's hopefuls will do a whole lot better. But at least I had a listen and this is my ranking.

5. Astrid / Everybody Aches
A heartbreakingly bland song given a far too complicated arrangement. Possibly on purpose, to confuse the viewers into thinking this is modern and/or artistic. Highly forgettable.
Grade: 1/5

4. Laura / What's The Pressure
An attempt at funk that is totally void of any personality what-so-ever. Would have needed a real powerhouse performance to save it but poor Laura doesn't have a lot to offer.
Grade: 1/5

3. Tom / I'm Not Lost
For three minutes, Tom keeps insisting he's not lost but I'm not sure the vocal coaches of Europe would agree. The song is OK but I can't focus on it as I keep feeling too scared for Tom Boy to totally lose his key.
Grade: 2/5

2. Amaryllis / Kick The Habit
Somewhere in Belgium, Lena Philipsson made an impression on a local choreographer. Twelve years later he would tell poor Amaryllis to dance with her microphone stand without really being able to repeat the same effect. The song has its moments, but never really takes off. Every time it almost goes somewhere it soon falls apart again.
Grade: 2/5

1. Adil / In Our Nature
Adil has been studying Loïc's performance closely. A bit too closely, perhaps. Lying on the floor at the start and the end feels a bit contrived and silly, but in between that he turns out to be the best performer of this lot. The song is no masterpiece but saved by a warmth that is lacking in the other entries.
Grade: 2/5

Conclusion:
A really poor lineup. These performers are not ready for an occasion as big as Eurovision and have all been given pretty sub-standard songs to work with. No idea what the Één tried to achieve but I think we can safely say they didn't quite pull it off. Belgium is most likely to stay in its semi this year.

Happy new year to everyone and let's be blunt and get straight to the point: 2015 wasn't a very good year. It had its moments but globally and politically it has been nothing short of dreadful.

The same goes for Eurovision 2015. It had its moments but will hardly stand out as one of the more memorable editions, despite the grand anniversary and all.

Austrian television tried to make a stylish show and gave us a grand stage set, very pleasant postcards and an adorable Conchita in the green room. Unfortunately there were also shaky cameras, a highly anonymous host trio with weak scripts and an appalling lack of substance whenever there was time to be filled, for instance in the interval acts. 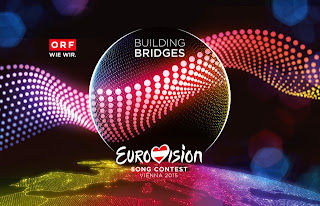 Having a comfortable distance to last year's entries, here is my final top 40. Some songs grew on me, some songs collapsed and some remained in their original places.

40. SAN MARINO
I remember watching the 1998 German final where Ralph Siegel had written three terrible entries and wondering how a legend could sink so low. Little did I know what the future and herr Siegel had in store. Poor kids. Let's hope Michele gets another chance with some decent material instead.
Grade: 0/5

39. ARMENIA
A musical meltdown filled with good intentions but lacking as good as everything else.
Grade: 1/5

38. SWITZERLAND
Under-developed and shouty. Would have needed some serious re-writing, and when the electric guitar comes crashing in at the end all hope is lost.
Grade: 1/5

37. MALTA
Almost as shouty as Switzerland. Slightly more developed but not enough to capture my interest.
Grade: 1/5

36. FRANCE
Old-fashioned and dull. Also pretending to be a peace song despite harbouring some potentially unpleasant messages between the lines.
Grade: 1/5

35. FYR MACEDONIA
Again FYR Macedonia manages to take a perfectly pleasant entry and ruin it on the way to the final. The revamp took most of the punch out of the chorus and the stage presentation was the last nail in the coffin.
Grade: 1/5

34. BELARUS
There is quite an ok hook in here, but you can't build an entire entry on the repetition of one little hook over and over again. A song as simple as this one would also need a much stronger performance.
Grade: 1/5

33. ICELAND
Anemic pop, remarkably void of any flavour or scent or temper. It's nice while it goes on but instantly forgotten.
Grade: 1/5

32. ALBANIA
A song that wants to be contemporary, impressive, complicated but catchy. Could have worked had the singer managed to control her voice better.
Grade: 1/5

30. HUNGARY
Another well-intended anthem for peace. Cute in a way but also too slow and the lyrics are way too obvious and literal for it too work.
Grade: 1/5

27. GEORGIA
Some temper, some power. Very welcome elements in this lineup full of ballads. But like so many others, this one soon feels very thin and lacking in dynamics. Insufficient.
Grade: 2/5

26. CYPRUS
A cute song and cute performance. Likeable but not sensational. And a shame they didn't dare keep it as downscaled live as in the preview.
Grade: 2/5

25. AUSTRIA
Unfair that this one should go down in ESC history as the first time ever the entry of the host country fails to score. Unfair but understandable. Competent but nobody's favourite.
Grade: 2/5

24. POLAND
Pleasant and breezy, but ultimately yet another slow entry that would have needed a more dynamic build-up.
Grade: 2/5

23. MOLDOVA
Sexist and loud and stupid. But at least it brings the tempo up. And it is catchy enough.
Grade: 2/5

22. NETHERLANDS
Surprising that a song that was revealed so early in the season went through no development and that this really experienced performer fell through so totally. The stage show is an almost epic failure, one you could analyse for years. The song is a bit repetitive and simple but would have deserved a better fate.
Grade: 2/5

21.SPAIN
Another interesting failure. An overloaded performance - bordering on parody - of a song that wants to be original but that really is little more than a re-write.
Grade: 2/5

20. GREECE
Another pretty dull ballad, totally saved by a strong vocal delivery and a charismatic singer. Would possibly have worked even better had she sung it in Greek.
Grade: 2/5

19. LITHUANIA
Silly but colourful and happy. And extra points for the same sex kissing. In a country like Lithuania, where things like these are frowned upon, this is more than an empty gesture. Well done.
Grade: 2/5

18. AZERBAIJAN
A complicated but interesting entry, ruined by a messy stage show and a some really violent over-performing.
Grade: 2/5

17.  CZECH REPUBLIC
Clearly the best Czech entry of all time - the competition isn't too hard in that discipline - is a bit too complicated to work but is very well performed.
Grade: 2/5

16. MONTENEGRO
A budget item from the Joksimović shop is still a good piece. It builds nicely and is well arranged without ever turning into a masterpiece. Would also have needed a more interesting performer to fully work.
Grade: 2/5

15. SERBIA
Bojana is a real star but the song doesn't really know where it is going. The English lyrics are also a bit simple and too much in-your-face for my liking.
Grade: 2/5

14. PORTUGAL
My biggest disappointment of the year. I always thought this one had something, and that a bit of hard work could bring it out. It never happened and I'm still one of the very few to appreciate it at all.
Grade: 2/5

13. ROMANIA
A very nice song that unfortunately turned a bit dull on the live stage. However, this is the first Romanian entry I really like in years. Quality.
Grade: 3/5

12. GERMANY
A most undeserved nul-pointer song-wise, but it is easy to see why this one failed to enthuse the masses. The performance is awkward with the long butt shot in the beginning and poor Ann Sophie never really connected with the cameras.
Grade: 3/5

11. AUSTRALIA
A good and bouncy debut entry. Well sung but the performance was surprisingly static.
Grade: 3/5

10. IRELAND
One of my favourite songs of the year, but Molly wasn't ready for the big stage. A very nervous performance paired with a most unfortunate starting position left this ballad chanceless in its semi.
Grade: 3/5

09. ISRAEL
I really disliked this one to start with as I found it completely silly in a bad way. But it some point it ate through my defences, being one of the few really happy songs in the competition.
Grade: 3/5

08. RUSSIA
I'm really no fan of cheesy peace ballads like this one, but I can't resist anyone selling their entry as well as the magnificent Polina did. A terrific singer that would have deserved a lot more love from the live audience.
Grade: 3/5

07. SLOVENIA
Headphones and an energetic chorus - I thought it would carry further than it did but it still stands out as one of the best pop songs of ESC 2015.
Grade: 3/5

06. NORWAY
Norway seemed to find themselves very much a niche of their own, sending in unusual and classy pop songs and for the third consecutive year it worked.
Grade: 4/5

05. LATVIA
After many lean years, Latvia is back among the top contenders with this divisive but glorious pop anthem. Not everyone's cup of tea but a well deserved success.
Grade: 4/5

04. ESTONIA
Two Baltic states in my yearly top five - it has been a while since that happened last. Atmospheric, sensual, suggestive and when Elina Born sheds a tear at the end I'm totally blown away.
Grade: 4/5

03. ITALY
Powerful and dramatic just the way I like it, but I can't help wondering if it would have been even better had they kept it entirely in the pop register instead of doing the popera thing.
Grade: 4/5

02. BELGIUM
Totally impressed with Loïc Nottet and his skills: songwriting, design, choreography. Now I am just waiting for his pop career to take off for real. Who knows what the boy could pull off?
Grade: 5/5

01. SWEDEN
My favourite from the word go. An intriguing verse, a catchy chorus and a perfect performance from Måns (even if it was slightly stronger in the semi compared to the final). A worthy winner in every way.
Grade: 5/5

All in all a pretty weak year with way too many mediocre filler songs. For next year I wish for more quality songs with hit potential. And for a couple that are at least bad in an amusing way.

Posted by TobsonHelsinki at 19:51 No comments: