The 20th Eurovision Song Contest, held at the Stockholm Fair Centre in Älvsjö on March 22nd 1975 - forty years ago today - didn't only give the world Karin Falck and a number of immortal quotes, it also launched a big innovation. Arguably the most important innovation in the history of the contest. 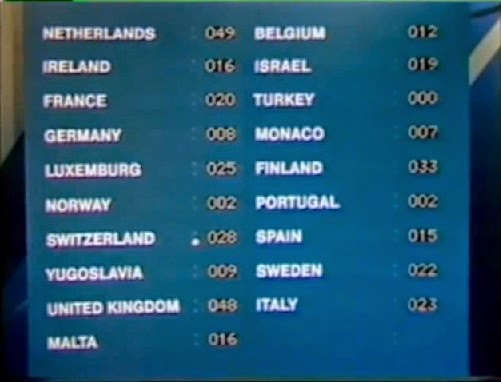 The EBU had been thinking for years about how to improve the voting - more or less ever since the early 60's. The matter had become pressing after the 1969 contest had ended in a spectacular fiasco where four countries shared the victory and no rules were in place to break the tie.

The new voting system launched in 1971 - where every participating country provided two jurors that ranked each song except their own with a mark from one to five - proved complicated to follow and led to pretty arbitrary results. It was scrapped after only three years. Something else was needed.

Heikki Seppälä, working for Finnish tv, had a better idea. He suggested every jury should vote internally, then award points to their ten favourite songs. According to the original plan, the winner should receive fourteen points, in order to give it a leap ahead. For reasons best known to themselves, the EBU thought twelve points had a better ring to it.

The famous 12 points had been born. After the 1975 contest, the EBU were sure they had struck gold.  The new system made the voting exciting, easy to follow and - best of all - it seemed able to ensure no song would be left with nul points.

That last thing didn't quite work out and not every voting has been exciting since 1975, but on the whole this new system has been a success. Ultimate proof is that it is still standing, forty years down the line.
Posted by TobsonHelsinki at 23:26