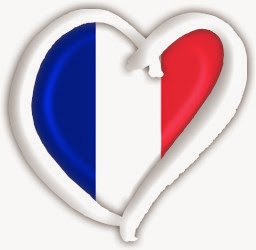 It was a bit unexpected that when the French tv-viewers got free hands to select their entry for The Hague, they went for a fast-paced, merry little singalong with more than a slight echo of Puppet On A String to it.

Through the years it was clear that the UK had pocketed this genre and claimed it as their own. They should do they whimsical up-tempo happy stompers while the French focused more on dramatic ballads about love or death or both, often with quality lyrics rooted in existentialism.

You can accuse "Un deux trois" of being many things, but it's not really existentialist. I doubt Simone de Beauvoir would have deigned to even frown at it. It's very jaunty, very light-hearted and concludes that life is a merry cabaret rather than a story by Kafka. (Maybe Simone would at least have let out a silent sigh at this point anyway?)

Just too bad for France that the UK were at their merriest too this year and beat the French cheerfulness by experience. The following year, France went back to the ballads and won in style. For the last time to date.

A deserved 2nd place?
Certainly. A most likeable timeless classic. But had I been able to shuffle songs around a bit, it would have been beaten by Monaco's fabulous disco belter. And by the Yugoslav heartbreak ballad.