Italy finally got to win Eurovision while France and Switzerland got their finest placings in many a good day. Then happened several things that would obscure the vision and distract the press and everyone else.

There was the absurd allegation that the winning band would have been doing drugs doing the voting. The very idea that someone would engage in a criminal activity while surrounded by cameras during one of the most watched shows in the world is so dumb that everyone contributing to spreading this accusation should hang their heads in shame.

Then people have been trying to put words in Barbara Pravi's mouth that she would be bitter and disappointed to get beaten by Måneskin, something she had very actively denied on her own social media.

Maybe now we can focus on the things we should have focused on as soon as all results were made public after the final: the very obvious case that something is very wrong concerning the points given to Moldova in the televote of the second semi final. 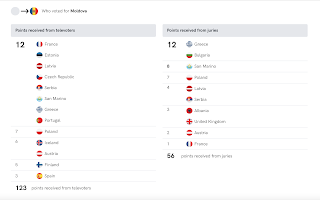 Moldova had a fun song admittedly but in spite of an outright mediocre vocal performance, the detailed voting information shows a jaw-dropping eight countries awarded top marks to them. Some of these are countries that are notoriously easy to swing if you are inclined to do vote manipulation.

After the 2013 Azerbaijan vote manipulation scandal, the EBU reluctantly looked into the matter and promised to take action if there was anything that looked suspicious.

The Moldova case does not just look suspicious, it sets all the alarm lights flashing. Philipp Kirkorov and his team are no strangers to manipulating their way to victory in the Moldovan final. Now it would be about time to have a deep look into vote manipulation. Again. And slap some people with a participation ban.

There is probably no idea to put a ban on Moldova. Their broadcaster is a small one with a strained budget and it hardly has the means to manipulate the televotes in other countries.

All the figures should be examined (as well as some really odd jury scores too - hello, Bulgaria!) and if there has been any vote manipulation going on (and it sure looks like it) all the people involved - the so-called Dream Team - should be banned from participating.

The Eurovision Song Contest is like playing Trivial Pursuit: it really is just a game but as soon as somebody starts cheating and disregarding the rules the fun ends and nobody wants to play anymore.

Email ThisBlogThis!Share to TwitterShare to FacebookShare to Pinterest
Labels: 2021, voting