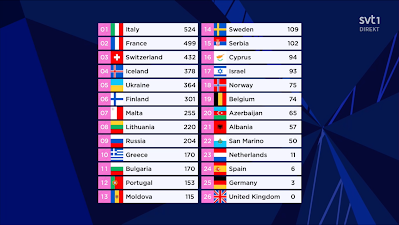 Four hours of Eurovision final later and it finally paid off to be Italy and continuously enter top talent - their biggest names that have already conquered the Sanremo festival. If that's not a seal of approval, I don't know what would be.

My prediction went pretty well in the end as well. My predicted top four all had a top five finish, only not in the order I thought.

I'm honestly a bit disappointed it wasn't to be Switzerland in the end. A shame that Gjon's Tears didn't hit home more with the viewers. But for him, as a new talent, a third place is a sensational result. Maybe better than a victory in the long run.

Switzerland and France (and the entire top six, in fact) showed that the old cliché is true: if you are yourself, work hard, do your best and have a bit of luck nothing is impossible. Now I hope especially France will remember this moment and not let their momentum slip. I want to see a French victory in the next few years.

Finland's sixth place is our second best showing ever (shared with Marion in 1973). Now the big task is to show we can do well with other types of music than rock. How about some excellent dark electropop next year?

Malta took over Sweden's old stunt of getting lots of points from the juries and then very little from the viewers. If you look at the the top six again, I think Malta would do better to kick the habit of buying songs from foreign songwriters and go for local talent instead.

Maybe let local songwriters work together with some more internationally renowned name? Worked really well for Switzerland. The same lesson could apply to Cyprus, Azerbaijan and San Marino too.

If I almost nailed the top four, I unfortunately also got the bottom two correctly. I thought the UK had really ruined their chances with that staging but nul points? That was very harsh.

Which brings me to one thing I really want to change for coming years. The current way of reading out the televote results really makes the segment awkward and puts an enormous focus on individual failure. It also becomes difficult to keep track of who was actually the viewer favourite.

Go back to the old system: read the televotes quickly, in ascending order. Read the bottom 16 quickly and don't dwell on who gets nul points. It wasn't particularly pleasant to see Gjon's Tears sweat and sweat and then get disappointed. This voting sequence would have been really dramatic anyway as televote winner Italy would storm up the board and win.

But next year in Torino, right? Let's hope that event will be a bit easier to organise.