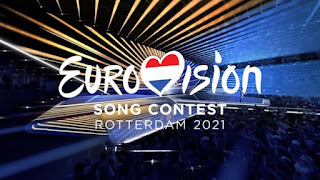 That was it, the first semi final is in the bag. It was a really nice moment in front of the tv set (yes, I am old-fashioned) and everything went down rather well.

In my prediction I managed to get nine out of ten qualifiers correct and while I'm happy to see Belgium in the final, I feel a bit sad that Croatia was the one who had to miss out.

I admit: it took me a while to get my head around Croatia so I can't blame anyone else for not getting it on a first listen. But I thought "Tick Tock" had a personality and a flair some of the other "girl with dancers"-entries were lacking. It's also a shame that the new ESC hype in Croatia is likely to fade out again.

I will focus on the finalists later in the week but what about the songs that missed out?

Slovenia and North Macedonia relied too much on impressive vocals while not having songs that reached the same level. Especially Slovenia ended up sounding more aggressive than impressive in the high notes and the audience seldom enjoys that.

Ireland was the typical example of someone thinking up a smart stage concept that they decide to push through regardless if it suits the singer (or the song). The Irish number was apparently sophisticated and hard to set up but only distracted the singer from doing her job of singing the best she could. To a lesser extent, Romania's third consecutive failure comes down to the same thing. Sometimes it is better not to try so hard and focus on what matters instead.

Australia lost out for the first time and unsurprisingly so. I applaud the effort to be yourself and do something unorthodox for the contest, but "Technicolour" only ever felt complicated for the sake of being complicated. It never felt genuine or like an organic piece of songwriting. Too bad about Montaigne who is a truly fascinating performer.

So where will Australia go from here? They are still the exception in the line-up and the one in need of special permission to take part. Will they be granted a longer stay or should they focus on getting Eurovision Asia to finally take off?

Dutch tv made a good show even if they had some technical difficulties between a few of the entries. I enjoyed the full focus on performers and performances without having camera shots obstructed by huge flags or having close-ups of random people in the audience during the songs. I want to see the audience before and after the songs, not during. Can we take a note of this for future years, please?

Without commenting further on the current situation I was also happy to see Eden Alene get a place in the final. She performed really well and it was a relief that she was judged on that and nothing else.

Time to catch some sleep and then we regroup and refocus and look forwards to semi final 2 on Thursday.