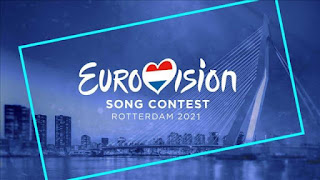 The first semi final is almost here so it is about time to do the impossible: predict what six entries will be voted off the island and end their Eurovision adventure tonight. I'm pretty sure about four of the unlucky ones but then a number of entries float around in the risk area of relegation.

To my surprise SWEDEN has failed to make an impression in Rotterdam. The first rehearsals left the press on location cold and Tusse had problems with his voice as well as with his in-ears. All of this should be sorted by now and "Voices" have risen in the press estimation but there is no buzz.

I'd like to think NORWAY is through thanks to a good song but the stage appearance runs the risk of pushing people away. Not sure the silly (not to say outright creepy) online flirt between him and Efendi was the best publicity either.

Efendi from AZERBAIJAN is another one I'm not sure about. I think her fans liked her song from last year and fail to see that tonight's rewrite lacks all the energy the original had. And the vast majority of the audience have not heard the first version.

ROMANIA is a song I am very fond of, but news reports suggest she has been singing badly all week. ISRAEL should sail into the final on Eden Alene's personality alone but there is a real risk people do not wish to vote for this because of the current events.

BELGIUM could be drowned in jury points from musicians appreciating a "musician's entry" but could also lack the dynamics needed to impress people at home. And my beloved CROATIA could prove to be that one song with dancers too many.

But there is no point in name-dropping, it is time to take a bold stand and do a real prediction.

I'll spend the entire semi on Twitter, feel free to join the fun: chat with me, agree with me, tell me I'm wrong. (I'd love to be wrong about Belgium, really.)