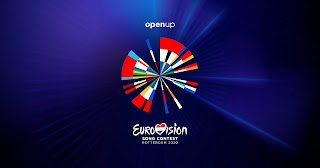 The 65th Eurovision Song Contest should have been upon us now. Tuesday and Thursday should have seen thirty-five countries fight it out for twenty spots in the big final. Fifteen of them would have left Rotterdam disappointed. Instead, this year, we are all disappointed.

Because of covid-19, the EBU decided to cancel the ESC altogether. 41 songs were thrown in the bin. 2020 is forever the year that never happened.

The corona virus is of course no small circumstance. It is the biggest immediate global crisis since the world wars. There was no way of knowing in March what the situation would be like now in May.

There were many of us hoping the ESC would still be held in some form. Postponing it never seemed likely, but how about making it a scaled-down studio production?

My suggestion would have been to let every participating country produce their own visual presentation of their entry and let that be presented in a tv studio with no audience. Then keep the format and let the viewers at home select the finalists and then the winner.

If that would have felt very basic and primitive compared to the big galas of later years, we could have put this year within brackets. The crisis year. Declare that the winner doesn't get to host next year's contest and that The Netherlands would have their chance to host as soon as it was possible again.

We would have had something extraordinary and familiar to look forward in these strange and stressful times. Instead the EBU decided to cancel their own flagship, the televisual Christmas, the longest-running format in tv entertainment and leave us with nothing.

We know that not everyone agreed with this decision. Christer Björkman was critical afterwards. According to ORF, German tv quickly presented a formula for a downscaled ESC that the EBU discarded.

The EBU statement boiled down to their belief that the ESC would not be the ESC unless every country was allowed to perform on the same stage. Which is funny given that in 2017, in order to keep Russia in the running, that seemed not to be important at all and Russia was offered the possibility to participate via link. Everyone has the right to change their minds, I suppose.

Another interpretation is that the EBU wants to keep the ESC as the enormous apparatus it is now. A huge arena, large ticket sales, elaborate stage sets, millions and millions spent on various arrangements. Maybe they don't want anyone to see that it is the format in itself that is brilliant? That you could scale back quite a lot and the show would still work? That's not a kind interpretation but fairly possible.

However, I don't share the EBU standpoint. The most important thing about the ESC is not that everyone stands on the same expensive high-tech stage set. Other things are more important to me. Continuity, for instance. Keeping Europe together when we need it the most. Giving people some hope and distraction and entertainment in the face of a crisis.

Austrian tv and Swedish tv organised their own shows to let the viewers pick their favourites. The EBU will broadcast their special show devoted to the contest on the night the final should have been held. I appreciate the effort but it doesn't really change anything.

This year's entries are lost forever. We will never have a result. No climax. No release. Without the big final these songs will soon fade into obscurity and never fully be part of the ESC canon. I feel a great deal of disappointment and, I guess, sadness about that.

What I feel even greater sadness about is that the ESC is no longer running without interruption. There will now forever be a "before" and an "after". Before the show was cancelled, it felt like something like that could never happen. Now that it has been cancelled once, it can be done again. A low-budget down-scaled ESC would have been so much better than no ESC.

It was also a mistake to pin so many expectations onto 2021. How the contest will be back then, stronger than ever. We knew already in March, already before the ESC was cancelled, that it is highly unsure whether any events with a large audience can be held even by May 2021. We already know it can't be held in The Netherlands before there is a vaccine.

I mourn my old favourite song contest and hope that this hiatus will be just that. That the ESC will still feel relevant and possible when this situation is over.

If you miss the ESC as much as I do, you can always take a bite of my other blog where I go through all the entries performed on a eurovision stage from 1956 to 2019. As for 2020, we just have to leave it here. As the ESC that never happened.

Email ThisBlogThis!Share to TwitterShare to FacebookShare to Pinterest
Labels: 2020, cancellation