And the winner is... anyone of these 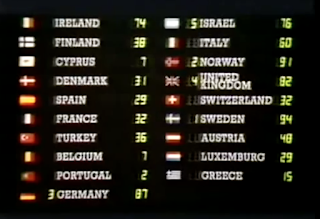 One of my favourite voting sequences ever is 1985 in Gothenburg. Two thirds through the voting all is still to play for and as many as seven countries can still win. Isn't that FABULOUS?

2005 was heading in the same direction but halfway through, Greece pulled ahead and the last half lost all excitement.

I am not saying we won't have a runaway winner this year - there could well be one - but who is it going to be? It has been many a good day since a final felt this open and unpredictable with as many potential winners lined up.

Düsseldorf 2011 was a bit similar but Lisbon 2018 is sensational in the aspect. The following countries all have a realistic chance of actually winning (in order of appearance):


That makes ten potential winners. The points will fly in all directions tonight and hopefully the juries will be professional (unlike last year) and strongly disagree on what is the best song. Let's hope the top ten or so remain very close after the jury vote and the final decision will be in the hands of the viewers.

If I scream before the winner is announced tonight, then the show is a success. Now I will try to figure out which one of these I really believe WILL win. Now there's a challenge for you all.
Posted by TobsonHelsinki at 11:37