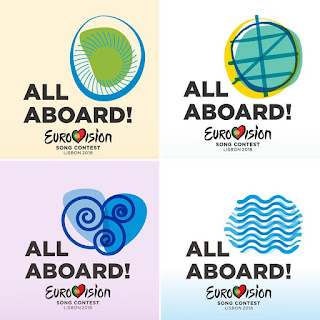 8 out of 10 finalists correct on Tuesday night felt pretty good given how impossible that semi looked beforehand. And here I find myself looking at a lineup that could produce any old random result. But for different reasons.

The second semi is considerably weaker and what we must remember is that just because Greece and Armenia were let down by their respective diaspora voters doesn’t automatically mean other groups will sleep through tonight’s show. New jurors, new audiences.

I also have a couple of songs I would love to see go through, just like I wanted Lithuania to make it on Tuesday night. Should I include them on my finalist shortlist even though I don’t really believe it?

And then there is that great big mountain - literally, this time - that is Russia. Can they qualify whatever they send in? Tonight is the night we will get the final answer to that question.

Eight songs will leave the island tonight and my prediction is they will be:

MONTENEGRO
The Iceland of this semi. Nice and competent and completely unlikely to be many people’s favourite. If you had one vote, would you vote for this? If so, why and who are you?

SERBIA
It is heartbreaking to see the Serbians seemingly thinking they reinvented themselves while they are actually waiting for a train that left the station a long time ago. A stronger chorus could have given them a chance, but this is too confusing and too early in the running to stand a chance.

SAN MARINO
The robots are cute and the song is OK. At least until the rap begins.

LATVIA
This is one of my personal favourites this year. In its studio version. Both the preview and most performances I saw seem to get in the way of the actual song and its very relatable lyrics. I really hope I am wrong here, part 1.

POLAND
A fair attempt at a popular genre that belongs at the ESC but that nobody managed to stage properly so far. Add some dodgy singing in this one will be out.

MALTA
You’ll find quite an effective hook in the chorus and a certain amount of high-tech brought along for the ride but nothing can change the fact this is a pretty weak and dated little effort, co-written by the man who gave us Euphoria.

SLOVENIA
It seems unlikely that the voters would suddenly get what Slovenia is trying to do but I love the bounce and the attitude. I really hope I am wrong here, part 2.

RUSSIA
Seriously. If Russia makes it this time then they could just as well get a free spot in the final. A weak song, dreadful singing. They are even trying to hide their own singer behind a prop. And don’t forget that Russia’s real entry tonight - where all their know-how went - is Moldova.

What I really hope for tonight is that the beautiful ethnic piece from Georgia picks up enough jury support and sails into the final. I’d love to be all wrong and get ridiculed for my prediction skills if it meant I could have Latvia and/or Slovenia in the final.

Also: if we have a shock non-qualifier tonight it could very well be Ukraine - complicated in a way that seems to leave most non-fans cold - or Australia if the performance stays as awkward as reports suggest.