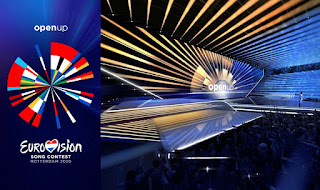 As you may have guessed after reading my text the other day, I haven't really found myself in any mood to play games or do predictions or write reviews of this year's ESC 2020.

I have mainly thought there is no point in predicting a contest that will never take place anyway. What's the use guessing a result we will never have anyway?

I guess that is still my point of view but tonight, as we should have been watching the first semi final, I decided I wanted to play anyway. So I will blog my own results, if I had been the omnipotent judge that would have determined the full outcome.

This is not a guess, this is not taking into account any other's opinion than my own. These are the songs that would have found themselves out in the cold had I had full control of semi one.

16. ROMANIA Roxen / Alcohol You
This one really wants to be clever and modern and doesn't want to come across as too easy or too eager to please. That's fine and all, but it also sounds a bit lazy. Like it's not ready to make an effort to tickle you. There's nothing wrong with it, it just doesn't stay with me. You don't have to cohol me when you're drunk, I promise.
Grade: 2/5

15. BELGIUM Hooverphonic / Release Me
Not a bad effort at all but if Romania tries too little, this one tries a bit too hard to be the coolest piece of music in the running. It's pleasant and well sung but I never feel the need to play it again or have another look. Sounds more like a competent filler on a strong album rather than a single.
Grade: 2/5

14. IRELAND Lesley Roy / Story Of My Life
A likeable singer with a catchy song that eats its way through your ear right into your brain with its schoolyard chanting hook. It just feels too much Disney Channel circa 2006 to really hit home with me. Good but not good enough, like so many recent Irish entries.
Grade: 2/5

13. SLOVENIA Ana Soklič / Voda
Big ballad with big drama and a big voice. I'm pretty fond of all the components in this machinery but can't shake the feeling this is a little bit too dated and old-fashioned for its own good.
Grade: 2/5

12. CROATIA Damir Kedžo / Divlji vjetre
I love myself a powerful male vocalist with a small army of backing singers behind him, like it used to be back in the good old days. This is an elegant composition but has a few twists and turns too many and needs just a few too many listenings to be that top contender.
Grade: 3/5

11. SWEDEN The Mamas / Move
This is where Sweden's ride ends in my ranking. The Mamas are really professional and warm and likeable but this entry is more a mood and a clever arrangement than a functioning song. I'd pick The Rounder Girls over this any day of the week.
Grade: 3/5

So my ten finalists for Saturday's final are (in alphabetical order):