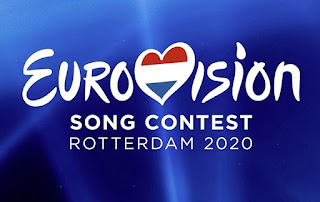 Today the sky is crying over Helsinki. If it is because we won't have any Eurovision this year and never find out whether Aksel would have made it to the final or not (or just because May has been more April than April ever was), is probably best left unsaid.

So far this week, I must admit that most shows put in place to celebrate the ESC and make up for the loss of this contest has mainly just created more of a void and underscored how hard it is to replace one of the most brilliant television concepts ever with something else.

Note that this is no prediction or attempt to guess what the outcome would have been like. This is me, myself and I ranking the songs according to my own personal taste from last to first.

Hold on to your snacks and here we go.

26. FRANCE Tom Leeb / Mon alliée
People I know quote this as their favourite so I have listened and listened again. And I have no idea what they hear that passes me by. To me this is a terribly predictable and repetitive, with a totally unnecessary language change and a sleepwalker performance by somebody who didn't invest a single bit of emotion into this. And why would he? My obvious last place.
Grade: 1/5

25. ARMENIA Athena Manoukian / Chains On You
This one got into my final for the effort to bring something contemporary with attitude. I like it but it never fully takes off or develops into any sort of climax. Could possibly have turned into something bigger on stage but we will never know.
Grade: 2/5

24. UNITED KINGDOM James Newman / My Last Breath
The BBC turning to a large record label to come up with an entry mainly resulted in better production values than previous years. As a song, this is still too static and never really goes anywhere. When you heard the first chorus, you heard it all. James could probably impress if he only had better material to work with.
Grade: 2/5

23. GREECE Stefania / Supergirl
This isn't a bad entry as such but everything in it seemed so squarely aimed at a very young audience. Should this have been in Junior ESC instead? The clip is so trivial it hurts and while the song is better, it is still a bit too polite and unexciting to be any sort of contender. The so called dream team behind this song looks a bit tired, truth be told.
Grade: 2/5

22. SERBIA Hurricane / Hasta la vista
An upbeat piece of fun but also fan service de luxe. Serving exactly the sort of song people want to dance to at Euroclub and it always works to a certain extent. It comes on stage, does what it's supposed to and doesn't leave any major impression once it's over.
Grade: 2/5

21. PORTUGAL Elisa / Medo de sentir
A sweet and likeable ballad of a kind that Portugal usually pulls off well. I am just going to assume something went very wrong with the sound in the national final as the voices don't gel particularly well at all. Sounds a whole lot better in its studio version.
Grade: 3/5

20. LATVIA Samanta Tina / Still Breathing
Catchy in some strange way. Interesting production. The strangest breakdown since Marie N's "ay ay ay ay". It isn't bad but above all it just the amount of bonkers we need to keep the ESC interesting.
Grade: 3/5

19. AZERBAIJAN Efendi / Cleopatra
A really fun eurosong where they threw in everything and the kitchen sink. It's highly entertaining for as long as it goes on but I'm not terribly fond of songs designed to work at the ESC only.
Grade: 3/5

18. ALBANIA Arilena Ara / Fall From The Sky
I am honestly surprised to find Albania as low as this in my list. I really enjoy the melody line in the chorus but also liked the Albanian version a little bit more. The emotion suddenly feels a little bit less urgent in English somehow.
Grade: 3/5

17. CZECH REPUBLIC Benny Cristo / Kemama
A good attempt of bringing a new flavour and genre into the ESC and I must admit I never expected a rhythm like this to be provided by the Czech Republic. Pretty good but a slightly stronger chorus wouldn't hurt.
Grade: 3/5

16. AUSTRALIA Montaigne / Don't Break Me
Just like with Portugal I like this more than you'd think when you see the ranking but the staging is a real question mark for me. Maybe it is really artistic and deep but I only find it distracting. If you have a strong hook you should distract people away from it as little as possible.
Grade: 3/5

15. SPAIN Blas Cantó / Universo
Blas does a Montaigne in reverse and elevates his pretty basic song into something bigger than it is. A cheap trick perhaps but that falsetto by the last chorus gives me a decent amount of goosebumps. Spain's best effort in many years.
Grade: 3/5

14. MALTA Destiny / All Of My Love
One the first listening, I thought this was our winner. A strong voice with a strong presence and a song to match. Then on repeated listenings the magic evaporated a bit and the Maltese package started sounding less and less special. Not that it matters. With an organic performance, focused on Destiny and with no distracting special effects, I still think this would have been a contender.
Grade: 3/5

13. NETHERLANDS Jeangu Macrooy / Grow
An aptly named song as it is this year's grower. At first I thought this pleasant and forgettable until it started hitting a nerve. Could have been a surprise in Rotterdam and either way the best placed host entry since Frans.
Grade: 4/5

12. ISRAEL Eden Alene / Feker libi
After last years ballad snooze, Israel got their mojo working again. Eden and this song fit each other almost perfectly and even if she gets another chance to represent her country the next time we'll have an ESC it leaves me wondering how they can come up with an equally suitable entry for her? How many of the 2020 artists given a new chance will manage to better their game?
Grade: 4/5

11. BELARUS Val / Da vidna
Belarus seldom tickle my senses in the ESC, so of course the whole thing is cancelled the year I genuinely enjoy their entry. Understated and quirky pop by a band that is slightly too artsy for their own good (which only makes me like them more).
Grade: 4/5

10. NORTH MACEDONIA Vasil / You
The song title is all wrong and I can't even begin to think of the mess they could have done with the staging here but I liked this track from the word go and have spent the whole season genuinely surprised to see how almost nobody else does. But by all means. You cling on to your Hooverphonics and Romanias and I will go through the summer with this in my headphones instead.
Grade: 4/5

9. UKRAINE Go_A / Solovey
It is hard to beat Ukraine anytime they really put their minds to it. This isn't their finest moment in any way and yet they sail straight into my top ten. Knowing my Ukraine, there is no doubt in my mind this would have been flawless and captivating in the final that we never had.
Grade: 4/5

8. NORWAY Ulrikke / Attention
Denmark, Finland and Sweden were all left out of my personal final but the two Nordic songs left both made it into the top ten. This is perhaps old-fashioned but also exquisite craft, performed by a singer adding edge and emotion. I hope Ulrikke one day will have licked her wounds and feel ready to go for it again. If not, I totally understand.
Grade: 4/5

7. ICELAND Daði & Gagnamagnið / Think About Things
Let me parade out of the closet and admit to being one of the five or so people alive on Earth today not thinking Iceland would have won this final. I'm really fond of the song as well as the image of the band, but in the end I think it would have been a tiny bit too much school theatre production to convince the world.
Grade: 4/5

6. RUSSIA Big One / Uno
Suddenly I had no idea what to think. What was this? Who are these people? Are they pulling someone's leg? And whose leg, if so? This is the first Russian entry I have fully surrendered to since the babushki back in Baku. I love how this feels geeky, smart, unpredictable and anything but the typical click monsters Russia have employed lately. I feel an extra dose of sadness that this moment never happened.
Grade: 4/5

5. SWITZERLAND Gjon's Tears / Répondez-moi
For me, this will remain one of the biggest question marks of the year: could this have been the first song in French to make it into the top three since Annie Cotton in 1993? It all depends in how good voice the Swiss boy wonder would have been in on the final night but at least to me it is clear he has an extraordinary talent, voice and personality. I really hope he will not disappear out of the public eye after this. I want to see and hear more.
Grade: 5/5

4. LITHUANIA The Roop / On Fire
Tonight is probably an extra bitter night for the likes of Bulgaria and Iceland and Malta and Lithuania, all of which could have had a theoretical chance of winning the ESC for the first time. At least the Lithuanian final reached a new high and The Roop were catapulted into local superstardom. With a little bit of luck, they will be able to build on that momentum in the future.
Grade: 5/5

3. ITALY Diodato / Fai rumore
This took a while to grow on me after Sanremo but then Italy did what Italy usually does and is one of my absolute favourites. I'm very fond of my entire top three and deciding which song gets which placing is really hard. Italy gets third place because I say so but could equally well be number one.
Grade: 5/5

2. GERMANY Ben Dolic / Violent Thing
"Good with nifty production" was my first thought. Then, as the ESC got cancelled, I realised this was the one I would miss the most. The one I really would have wanted to see and experience. The way it builds and builds and keeps adding elements throughout the entire song. What a hit this could have been.
Grade: 5/5

1. BULGARIA Victoria / Tears Getting Sober
Sometimes a song comes and hits you in exactly the right spot at the right moment. This year, it was Bulgaria for me. A very pretty song that makes me very emotional every time I hear it. And for the record, I am hundreds of years old and have never heard Billie Eilish. Unless the Symphonix team decides to throw in the towel now, I would not be surprised to see them win the next ESC. Whenever that will be.
Grade: 5/5