They did it. After what felt like 200 years of waiting, the Netherlands finally broke through and got a fifth victory at the Eurovision Song Contest. After an outright terrible run of entries, somebody at Dutch television decided to shape up in 2013 and it finally paid off.

"Arcade" is a lovely, contemporary song. I saw it as a potential winner all through the season but never thought it would actually win in the end. It seemed a bit too moody, a bit too demanding. And the disappointment would have been too great if I predicted them and they failed.

The winner could translate into the well-needed commercial success I've been missing for the last few years and possibly Duncan himself could have a shot at a lasting career.

Now it is anybody's guess where the final will be held next year. Amsterdam? The Hague? Rotterdam? Somewhere else? Is there a suitable arena in Hilversum as a nod to Eurovision history?

My personal winner of last night was Italy. Initial reports from Tel Aviv suggested Mahmood didn't go through the cameras but when it mattered he performed the life out of his song. I found myself watching this on repeat several times today. The emotion of the last chorus is breathtaking. What a star he is!

As a political side note (since this contest tends to get a bit political now and then) I really hope Salvini was watching last night as he insinuated after Sanremo that Mahmood was not Italian enough to win.

I am also overjoyed that the juries finally saw reason and voted for Italy. Maybe next year we could finally have that Italian victory that is so long overdue.

The big surprise was - of course - North Macedonia. Just like Mahmood, Queen Tamara knew how to squeeze every little drop out of her performance and the juries poured their love over her.

Unlike some others, she also had the wit and composure to hold her poker face and give her widest smile even as the lack of televote support transpired. Anyhow she travels back with what is by far the country's best showing to date.

John Lundvik was not as lucky as the camera truly well registered his disappointment as the televote mark was read out. A sixth place is not a failure for anyone else but maybe it is for Sweden. Their songs go down a storm with the juries while the voters at home are left cold.

Has Europe finally overdosed on the Swedish perfection and craftsmanship? It sure feels like the blue and yellow domination is broken in many ways. Even if Swedish backing singers, dancers and choreographers are still heavily in demand most of the songs in the top placings were local products rather than something leased from Sweden.

The biggest challenge for Melodifestivalen in the near future is maybe just that. How to find new ideas and expressions that feel fresh and organic instead of immaculately produced and fine-tuned? Sweden would never find anything like Mahmood or Hatari with their current formula.

Hatari gave a surprisingly unfocused performance but still stood out enough to give Iceland its first top ten showing since 2009. Then they pulled their Palestine banners out and may have landed RÚV in trouble for next year.

If the EBU wants anyone to take the rules banning political messages and statements seriously, they must put their foot down. Who knows what kind of manifestation other participants will want to go through with in the future. Iceland got a firm warning before the broadcast and could therefore get fined or - possibly - disqualified for next year.

The Belarusian jury got themselves disqualified after the semi final as they shared their scores in public. Stupid and unprofessional and instead of jury points, the Belarus score was calculated according to some EBU formula.

I would very much like to know what that formula looks like as the set of points the Minsk spokesperson got to read out were outright bizarre. Full marks to Israel? High marks to Germany and Estonia? Where did these points come from? 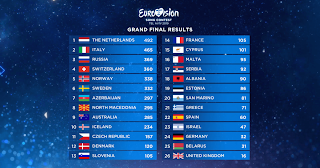 The new way of reading out the televote scores was also a big success and kept the excitement at a maximum until the very end of the voting sequence. A real thriller and exciting like it sometimes was back in the good old days of unpredictable national juries.

What doesn't work at all is the ridiculously long voting window. No shade over any of the interval acts - maybe there was a sick note or two, but Madonna is still Madonna - but it took over an hour from the last song until we got any points. In Finland it was over one in the morning when the first jury was called up. A few years ago, the show was supposed to end around that time. I wonder how many viewers gave up and went to bed before the interval acts came to an end?

Israeli tv got better and better throughout the week. From the first rather shaky semifinal into Saturday's fun and slick final. All in all, very well done and a tough act for the Netherlands to follow.
Posted by TobsonHelsinki at 23:38