A little short on updates...

Quite a lot has been going on in the world of Eurovision this week, but there has been no time to blog about it as I have been part of "De Eurovisa" - the Eurovision 2012 preview show on Yle. 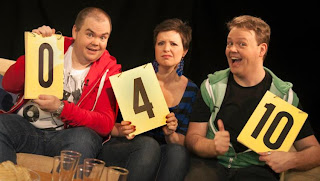 A panel consisting of Johan Lindroos, Eva Frantz and me (plus one star guest per week) will review all the songs selected for Baku and the show starts on April 17 on the Yle Fem channel.

Quite a responsibility, given this is the only "real" preview show produced by Yle this year.

Next week will also be filled with preview-related work, so updates might be scarce for a few days to come as well. But have faith - in April I will start reviewing the competing songs also on this blog, very much like I did last year.

In short - there will be more to come for those with patience. I hope it will be worth the wait.
Posted by TobSon at 16:11