This is the scoreboard used in my year of birth, but that is not the main reason for showcasing it like this. 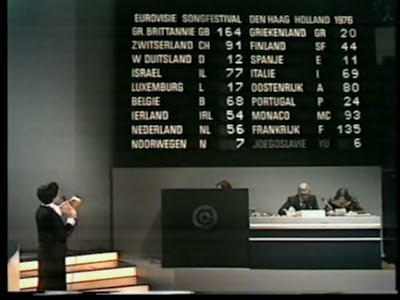 First of all - it is in Dutch. A nice touch that would probably be unthinkable today. The last scoreboard in another language than English was used in Lausanne 1989 , and only very few scoreboards have been presented in other languages than English or French through the years.

Of course that is better - the scoreboard is there to be clear and easy to understand, and having the countries written in, say, Hungarian or Finnish would confuse the greater part of the audience.

It looks a bit basic, perhaps, but it indicated the country giving their points by letting the country's name flash nicely.

It was also close to becoming the first scoreboard ever to mention Liechtenstein, as the tiny country made a brave effort to enter. As their bid was rejected due to them not having any national broadcaster, hence not being a member of the EBU, Switzerland offered to enter under the name Switzerland & Liechtenstein.

Dutch television refused, however, as this would have taken too much space on the scoreboard. (In all fairness, it would.)

And for extra bonus value: the presenter beneath the board is no other than Corry Brokken - winner of the 1957 Eurovision Song Contest in Frankfurt.
Posted by TobSon at 11:51