You know the feeling when Eurovision is over and your head is boiling and you should go to bed but you really feel the need to blog a bit in order for your thoughts not to get too filtered through sleep?

So. Team Ukraine won. Big style. Like the bookmakers had thought they would ever since March. I had expected them to end in a dignified second place but the support from the televote was deafening.
In the end, the pop entries from the UK, Spain and Sweden had nothing on the etno-flute-rap served up by Kalush Orchestra. A strong entry that could have won any old year but that turned invincible by the emotional twist of cruel reality. 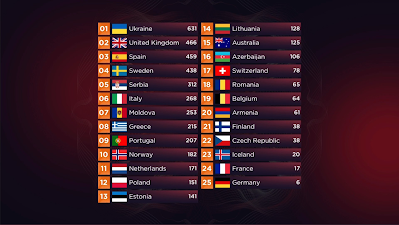 In case you know me, you know I am a pop kid who would want the most likely commercial hit to win the ESC. Even the slightest suspicion that something won because of anything else than hit factor is usually a big no in my book. But this is not our average year. This is a very unusual and very disturbing time. How can we expect any corner of our lives and cultures to be untouched by that?
The voting turned out to be very exciting although a bit shaky. Why was Laura Pausini absent for most of it? What happened to the countries that could not be contacted? Why did the hosts have to win time at deeply illogical places?
A very large number of voting irregularities had been spotted in the semi finals. Would it be time to shrink the voting window down (and maybe get the voting started some ten-fifteen minutes after the last song) and see if that makes it harder to try and manipulate things? Or was it juries that behaved badly?
Speaking of irregularities but somebody has to mention Azerbaijan. The votes they received from the juries were odd to put it gently and the fact they qualified on jury vote alone while getting zero points from the viewers is astounding. For how much longer do we have to put up with their games?
Some things surprised me but I will content myself with saying how deeply sorry I am about the French fiasco. Going from a hot favourite to second last in a matter of days without really doing anything wrong is brutal. I hope the team doesn't give up - hang in there, la France.
And then the big question... where will we go to next year? There is no way Ukraine can undertake an event like the ESC in 2023, even if the war was over tomorrow. The logical thing would be to ask the UK or Spain if they want to host, but would they want to without winning? Would they rather try to win it next year instead of hosting as a consolation prize?
Next year's contest is likely to be hosted by some EBU member broadcaster that could take it on without their budget taking too much of a hit while remaining relatively invisible and make room for a large input from Ukrainian television. I'd say the obvious choice would be Germany but what would that look like, now that they scored their third last place in ten years?
So many question and so little sleep ahead. Sweet dreams and may many of the entries live long and prosper in the charts.
Posted by TobsonHelsinki at 03:06