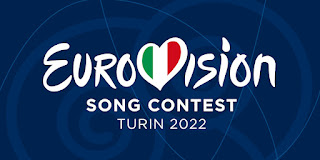 The time has come to put my money where my mouth is and take my final and ultimate guess at how the final of the 2022 Eurovision Song Contest will end. The whole season everything felt completely wide open - between a number of strong candidates it seemed wide open - and two hours before the final the feeling remains the same.
Maybe not AS open as a few of the songs that formerly seemed like contenders have lost their momentum or ended up in the shade. Some because of disappointing performance, some because the competition proved too hard, some because they got a bad spot in the running order.
But there are still four or five songs that could easily take the victory. I genuinely think the United Kingdom and Spain will both go far but not all the way, but maybe they will surprise me. Italy could turn on all power gears and take an unusual double. Ukraine could capture enough emotion to get to the top.
Since the running order takes a few unexpected twist and turns, we also have a real chance to see a real surprise winner emerge out of the blue. Maybe France still has a chance? Maybe Norway is the fun break we all didn't know we needed?
But no - all roads lead back to the same answer for me. I think Sweden will grab its seventh victory tonight. Cornelia Jakobs and her intense performance is likely to sway jurors and viewers alike and run away with the trophy.
Poor Germany will end in another disappointing last place unless Romania or Switzerland manages to break their fall. Maybe they could get a glow up for 2023 like the UK and Spain had this time?
My attempt at predicting the top 25 looks like this: 01. Sweden, 02. Ukraine, 03. Italy, 04. United Kingdom, 05. Spain, 06. Netherlands, 07. Estonia, 08. France, 09. Greece, 10. Norway, 11. Moldova, 12. Lithuania, 13. Portugal, 14. Poland, 15. Serbia, 16. Australia, 17. Finland, 18. Czech republic, 19. Armenia, 20. Belgium, 21. Iceland, 22. Azerbaijan, 23. Switzerland, 24. Romania, 25. Germany.
Please hang with me and tell me how wrong I am over at Twitter. Let's hope for a very entertaining evening and maybe for a surprise or two?
Follow @TobsonHelsinki
Posted by TobsonHelsinki at 20:22