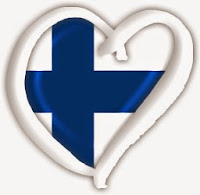 Normally I would never complain about anyone having ambitions and setting high goals for themselves. Already last year UMK made the decision to make the event more televisual and interesting for the viewers, in some cases even staging live video clips rather than to offer old-school performances.

UMK and Eurovision are tv shows so I understand what they are trying to do, but while last year's edition felt surprising and successful I can't help but feel this year most of the visuals get in the way.

Performing on tv is not easy. It takes a certain kind of knowledge that few Finnish artists possess. Not because they are bad, but because the opportunities to sing on live tv in Finland are few and far between. Often when these performers are thrown into a staging full of choreography and dancers or visual elements the end result is not what anyone would hope for.

Instead of owning their performance, many of the singers seem to disappear behind all the things that are supposed to help them. Sometimes it would be better to just scale things down a bit. When the performers don't feel like an organic part of their own performance, the songs get lost too.

Having said this, I look forward to what tonight's entries - quite a good bunch - will look and sound like.

Lieminen / Pehmeiden arvoiden vaalijat
A radio friendly song with some sort of distant kinship to the likes of Pet Shop Boys. Unfortunately it also makes me think of Sébastien Tellier or even more of Aikuinen of last year's UMK: the kind of song that sounds great on the radio but that is almost impossible to sell to an audience on television.

Tuuli Okkonen / Don't Wake Me Up
A stylish and very "eurovisional" ballad that would probably be a hot favourite had this been a Swiss or Belgian national final a few years ago. A good vocal performance could elevate this one quite a bit, but in the end there is too little progression and not enough of a climax to go all the way.

Gušani Brothers / Poom Poom
The Vengaboys are alive and live in Finland? This is your typical summer hit that could play over and over at all the dance floors in the entire republic. Catchy and easily retainable but it also gets a little flat before three minutes have passed and the video clip suggests that these boys are perhaps not quite ready for the big time just yet.

Barbe-Q-Barbies / Let Me Out
The best rock entry we had in UMK for many years. Very much like "Hard Rock Hallelujah" back in the day this one has a strong pop hook that the viewers can hold on to already on a first listening. The only thing I'd wish for was even more intensity but maybe that will be added in the live performance.

Pietarin Spektaakkeli / Liian kuuma
The refreshing retro sound feels most welcome and almost had me fooled this could be a dark horse. But in the end neither the song nor the main vocalist are strong enough to make a lasting impression.

Sandhja / Sing It Away
One of my early favourites with a clear melody line and a catchy chorus that feels up to date at the same time as it looks back to dance hits of the 1970's as well as the 1990's. If this one gets a tight and focused presentation with a strong vocal delivery it should be bang in the final.

Tobson predicts:
Since I know so little of what to expect from these performances I will just predict the two songs I really hope for - Sandhja and Barbe-Q-Barbies - and then pick a guess that Gušani Brothers will be charming enough to make it to the final after all. But it could just as soon be Tuuli Okkonen too.
Posted by TobsonHelsinki at 17:40