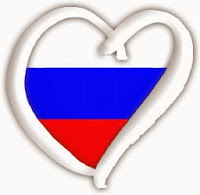 Tonight is Judgment Night when Europe will finally decide which one of the twenty-seven finalists will be the winner. One of the most likely winners is Russia, given a performance slot close to the end, in theory one of the best places you could get in this running order.

I have been critical of this entry but mainly due to the horribly cheesy lyrics. A load of clichés stacked onto one another in a way I hoped we had left behind somewhere in the early 1990's.

But the song itself has a very strong chorus, which is enhanced even further by the terrific performance by the glimmering Polina Garagina. She is clearly one of the best singers in the running and makes her song come alive. I even almost forget the horrid lyrics because she is so good. Warm and likeable.

If Russia wins, it will be a real headache for the EBU in the coming year. Is it even possible to host this event in Russia under the current circumstances? And if they decide that it's not: what rule in the rule book could be used to explain why Russia wouldn't be offered the right to host? Expect a lot of nervous tip-toeing around a number of questions if Polina wins tonight.

I hope none of this would matter tonight. Russia is not my dream winner for a number of reasons but if they don't win at least I hope it won't be for political reasons. Judge the songs, judge the performances and then we deal with the rest later.

Dream result:
somewhere between 3rd and 5th place, a dignified result not too close to the top

Polina Gagarina - A Million Voices (Russia 2015)
Posted by TobsonHelsinki at 11:26

Email ThisBlogThis!Share to TwitterShare to FacebookShare to Pinterest
Labels: 2015, Russia