Could Loïc be the surprise of the year? 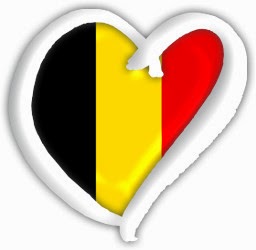 I will be honest with you, good people. So far I'm not really blown away by anything chosen for Vienna. Most of the chosen songs are nice, some even really nice. But I need a little more than nice to get enthusiastic.

It doesn't mean much - we have a long way to go and many songs are yet to be revealed and some of the chosen ones will be heavily reworked and sound smashing once the preview videos are delivered.

But I've come to pin my hopes on a country I haven't often expected much from. I'm really hoping Belgium will bring in a sensational entry.

RTBF had an internal selection and decided that young Loïc Nottet will represent them. Just like the last representative from Wallonia, Roberto Bellarosa, he made an impression on The Voice Belgique and released his first single - a remake of Sia's Chandelier - some time ago.

At first I thought it was odd. Why make a cover of a song that is such a massive hit? What's the point? Lack of imagination? Then I checked the video clip out and my jaw dropped.

Loïc is only 18, but this voice that lives in him - where does it come from? I love his vocals as well as the slightly crazy, slightly "artistic" choreography. I watch it over and over and can't get enough. This kid is King of Cool. At least in Wallonia.

If they manage to find him a good song - preferably something modern and edgy and slightly too pushy for the ESC - he could emerge like a real favourite. And boy, does he deserve a long career. I have no idea when the Belgian entry will be disclosed but I'm longing already and will be sorely disappointed if it's less than fabulous.

Email ThisBlogThis!Share to TwitterShare to FacebookShare to Pinterest
Labels: 2015, Belgium