The last three editions of Melodifestivalen hosted by Stockholm had all been more low-key productions, held in a studio or as part of another show, but in 1989 it all turned big. Very big. Possibly too big.

The Stockholm Globe Arena had recently been inaugurated and was about to host the World Championships of ice hockey a few weeks later. In order to make good use of the spectacular - and controversial - new venue, it was decided to host Melodifestivalen there.

Ten thousand tickets went on sale and clearly that was a few thousand more than there was a market for. You don't have to look very close to see loads and loads of empty seats on the night. But the final itself looks spectacular and the songs on offer were generally good and surprisingly contemporary. 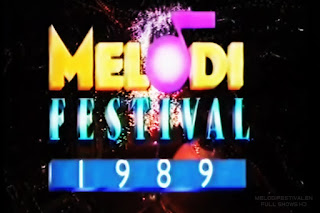 10. True Blue / Jorden är din
Lasse and Maggan Andersson - married at the time - were both able and professional studio musicians and backing singers but tried a little too hard to install something into their little song that was never there to start with. Dull and shouty.
Grade: 1/5

9. Catrin Olsson / När stormen går
A clear mismatch between a song that is decent and a singer who would have had a lot more to give in another type of entry. When the final chorus is repeated for the third time all hope is lost and no pretty string arrangement in the world would be enough to save this.
Grade: 2/5

8. Fingerprints / Mitt ibland änglar
A pretty anonymous band wasn't helped by the fact that this is more a bouncy rhythm than a functioning composition. For some reason, the juries saw something in this and placed it third on the night.
Grade: 2/5

7. Cajsa Bergström / Genom eld
Actually a pretty wonderful little song - modest and melodic - that would have needed a much stronger performer to pull it off. Cajsa looked tiny and scared on Globen's huge stage and walked off never to be heard from again.
Grade: 2/5

6. Visitors & Sofia Källgren / Världen är vår
Visitors were quite a popular little synthband that had had some nifty and progressive hits and it was a bit of a letdown to find what a traditional entry they had written for MF. There is no real sparkle between them and young Sofia Källgren, no drama or attraction or friction needed to kick real life into this package. Good but too nice.
Grade: 3/5

5. Lisa Nilsson / Du
Lisa almost got herself disqualified - and replaced by Arja Saijonmaa doing another Lasse Holm entry - because the rules were unclear about when people were allowed to reveal that they had entered songs for MF consideration. She would subsequently turn into one of Sweden's finest vocalists but wasn't quite there just yet and the song - signed Ljunggren-Almqvist-Forsman - is good but not their best. Enjoyable but not outstanding.
Grade: 3/5

4. Haakon Pedersen & Elisabeth Berg / Nattens drottning
Since MF 1988, Haakon had recorded a successful duet with Lotta Engberg and was on the verge of a breakthrough. He was given this Lasse Holm creation that paired a modern-sounding schlager with a few notes borrowed The Enchanted Flute by Mozart. Since then, many people have tried the same trick but it felt very fresh at the time. It didn't age awfully well but was my favourite to win back then.
Grade: 4/5

3. Lili & Susie / Okej Okej
L&S were originally scheduled to perform "Dansa i neon" in 1987 but were deemed too inexperienced. Since then, their popularity had exploded and they had made themselves a solid fanbase. Possibly the jury was a little bit too old to get the hype and held the sisters down in the voting. Despite not being one of their bigger hits at the time, this song had lived on and has in retrospect been upgraded to a classic.
Grade: 4/5

2. Eriksson-Glenmark / Upp över mina öron
Thomas "Orup" Eriksson had had a fantastic breakthrough in 1987 and was perhaps the hottest Swedish pop act at the time. He turned up as a duet together with long-time collaborator Anders Glenmark and together they sold their easy-going but effective pop song like there was no tomorrow.
Grade: 4/5

1. Tommy Nilsson / En dag
If there was anyone who could rival Orup's status as the top pop act, it was Tommy Nilsson. To have both of them take part in MF the same year was like a mad dream, a situation you'd dream of seeing again. Tommy had the advantage of getting a close to perfect song - suited for a pop audience as well as an international jury - that built and built without feeling repetitive. And his backing group, full of local stars, didn't hurt his chances either.
Grade: 5/5

Conclusion:
A dream year for SVT with a good lineup, a slick final and several hit singles after the contest. MF would soon be going brutally downhill in popularity but there were still no real traces of that here.

In a parallel universe:
I dare say nobody else in the lineup would have bettered Tommy's fourth place for the simple reason that his song sounds modern but yet suitable for a pretty square orchestra like the one on offer in Lausanne. Those musicians would have slaughtered "Okej okej" and made "Upp över mina öron" lose all its cool.