Maybe Stockholm got punished for downscaling the 1981 Melodifestival, but the competition was about to leave the capital and not come back for five years. Instead, Gothenburg had its real first shot at organising a Eurovision pre-selection.

Gothenburg had in fact hosted the 1975 melodifestival but the whole thing had been masterminded by the same old people in Stockholm. This time, Sweden's second city unleashed their own team and were determined to breathe new life into the show.

The biggest change of format was the introduction of a superfinal: five of the ten competing songs would qualify for the superfinal and get voted upon by the juries while the five non-qualifiers would all officially share the 6th place.

Maybe the ten selected songs don't constitute the strongest line-up ever but at least SVT Göteborg would learn fast how to do things better. 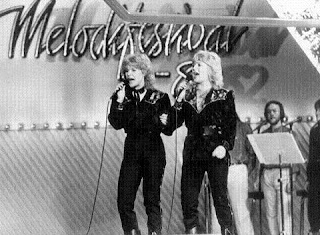 10. Little Gerhard & Yvonne Olsson / Hand i hand med dig
The whole show opened with this jaunty but lukewarm old schlager of a kind nobody wanted anymore (if ever). Half-heartedly performed by a duo without any trace of chemistry.
Grade: 1/5

9. Annika Rydell & Lasse Westmann / Här har du din morgondag
Would you believe? Another jaunty but lukewarm old schlager of a kind nobody wanted anymore (if ever) performed by another duo without any trace of chemistry. At least young Annika showed some temper and talent, totally wasted on a non-song like this.
Grade: 1/5

8. Charlie Hillson / Då kommer min ängel
Let's be kind and call this one an interesting fiasco. An attempt at Swedish rock with contemporary and slightly humorous lyrics that could, perhaps, have amounted to something in the hands of a better performer. The most intriguing part about it is the echo chamber effect performed live by the backing vocalists.
Grade: 1/5

7. Shanes / Fender '62
A harmless but slightly sexist set of lyrics - "I always admired the shapes of her body" - that finally turn out to be about a guitar and not a woman. Oh, well. Acceptable.
Grade: 2/5

6. Liza Öhman / Hey-hi-ho
Liza's solo career kick-started in Melodifestivalen 1980, but only two years later she didn't seem to keen on it anymore. She was already well established as one of Sweden's top backing vocalists and maybe that seemed more appealing. Anyhow, she is by far the best thing about this catchy but fairly mediocre piece of schlager rock.
Grade: 2/5

5. Chattanooga / Hallå hela pressen
This was the song that was hailed as the winner by the younger generation that found something off-beat and less streamlined than the general melodifestivalen output. Charming in its own well but also slightly amateurish. Could have been more than it was.
Grade: 3/5

4. Maria Wickman / Dags att börja om igen
Far too low-key to stand any major chance in 1982, but this is a sensitive little break-up-ballad well performed by another one of all those talented singers than never really made it big in the business.
Grade: 3/5

3. Lena Ericsson / Någonting har hänt
Another soft-spoken but suggestive pop gem with very sweet lyrics about finding love (and sex, most probably, from the sound of a line or two). Lena Ericsson always deserved more attention as a solo singer and despite ending in second place, this song went nowhere commercially after the contest.
Grade: 3/5

2. Ann-Louise Hanson / Kärleken lever
Now we are talking power schlager as Ann-Louise takes to the stage dressed up as the coolest chick in town, armed with a brilliantly arranged pop song written by Anders Glenmark. For some reason the juries gave this one the cold shoulder after voting it into the superfinal, but Ann-Louise still is the coolest chick in town and would still be a good choice for Eurovision.
Grade: 4/5

1. Chips / Dag efter dag
"A mutant schlager monster that crushes every piece of resistance" as one of the evening newspapers put it and I can only agree. The first tangible evidence that Team Mariann had started to master the art of crafting Eurovision songs. There were still a few wrinkles to iron out but this one still feels like an early classic and the shameless nicking of the "wa-wa-wa"-hook from "Waterloo" is the final touch.
Grade: 4/5

Conclusion:
The jury made the right decision - of course. No other song in the running would have had a chance of impressing an international audience more than "Dag after dag" in Harrogate. Possibly Ann-Louise could have given Arlette Zola a run for the money, but we will never know.

Then sadly Chips didn't do as well as anticipated in the ESC final. For some reason their performance felt more forced and less lively compared to the one in Gothenburg. An 8th place was Sweden's best showing since Abba - shared with Lasse Berghagen - but was still disappointing. Time to gear up.