During this selection season I kept asking myself several times if this was the year when Europe would bring out their shovels and dig even deeper below the sad sub-standard of 2001. It really did not look promising there for a while.

To my big relief, 2019 turned out to be an OK year after all once all the entries came together. Not extraordinary in any way but at least not a complete musical dumping ground. Big relief.

To read about the first six entries of the first semi-final, click here.

This is where the hard part begins. Joci made it into the top ten two years ago with a slightly similar song. This new song is possibly better from a songwriting point of view but also slightly less direct and with less of a hook. Will the voters still be onboard for this? How keen are people really to vote for things they already voted for in the past?

Qualifier:
Most probably yes. Joci is a very engaging performer and the melancholy vibe is likely to attract a number of fans. Plus Hungary has had a way lately of making it to the final - this will be their ninth consecutive qualifier.

I listened to all the songs on Spotify and to my big surprise I found myself really enjoying this. Previously I had discarded it as a modern-sounding but tired filler and suddenly my feet was tapping along in an unexpected manner. Zena has a good voice and out of all the songs that wish they were "Fuego" in the lineup, this one actually has a few little quirks of its own.

Qualifier:
Borderline. The ESC is still a televised event where people can see you perform and Belarus are surprisingly good at ruining their own chances with disaster staging choices. If they can keep this clean, sober and fun - and not shoot themselves in the hand like last year - they could be in with a chance.

Nevena was part of Serbias shoutfest non qualifier trio Moje 3 in 2013 and is now back to get her revenge. She has remained a very well-known name back home and now she is entering a big and emotional ballad, written by herself. At least it aims at being big and emotional. While nothing is really wrong with it - it is well put together and well sung - it feels like something we've seen and heard millions of times before. It doesn't trigger a single emotion in me and despite repeat listenings I have no idea what the chorus sounds like. In through one ear and out through the other one. At least "Ljubav je svuda" had a bit of action in it.

Qualifier:
Borderline. When Serbia joined the party back in 2007, I expected them to be winner material almost every year. In reality they often stumble around the threshold for qualification. In or out? I think they will struggle this time. 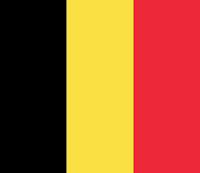 Even the best laid plans can go wrong. It sounded like a safe bet to have the composer of "City Lights" handpick a talent from The Voice Belgique and craft a song especially for him or her. While "Wake Up" has an excellent intro and a haunting verse, the chorus is disappointing and falls pretty flat. There is also an acute lack of development during the song and the whole thing is ebbing away rather than building up. Then it doesn't help that the charming little Eliot himself is too inexperienced to carry this weight all by himself. Maybe he should have waited a year or two?

Qualifier:
Borderline. There is still hope. Blanche finally delivered when she needed to and maybe the Belgian team know what they are doing. I just wouldn't bet my entire salary on it just yet.

Failing with a folksy offering in their own language did not discourage the Georgians, so here they go again with a powerful male singer and a song rich in local folklore. While I sort of like this, I learned a thing last year that Georgia seemingly failed to pick up on: Europe's appetite for locally flavoured belters seems pretty moderate.

Qualifier:
No. This is the "Qami" of 2019. Oto can sing his heart out all he wants but not enough people will warm to his song in the end.

If there is any truth to the slightly nauseating narrative that Australia was taken into the competition in order to show the UK what they could be with a bit of effort, then that plan is failing more and more as Australia has kept slipping backwards in the results. The slippery slope continues as this - the first Australian entry chosen in a national final - is little more than one big ESC cliché. Doing that same old pop and opera mashup that has been done over and over while pretending you just invented the wheel is a pretty tired look. Especially as this song carries the promise of turning into something really good without ever delivering any of the goods.

Qualifier:
Borderline. The juries have enjoyed voting for Australia while the viewers have been less keen. Will the juries keep supporting them now?