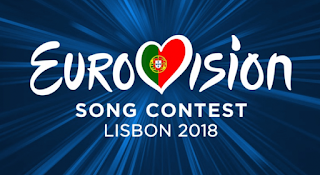 We are very, very close to the 2018 Eurovision Song Contest and I for one can't wait to see how Portugal will pull off hosting the ESC after waiting for this opportunity for so long.

Fate has been nice to RTP as it handed them the strongest lineup for many years to work with. Many of these songs are so good, they need no LED screens to make them come alive and shine.

Here are my thoughts on the songs, judging from this years preview clips, which you can see on the official Eurovision YouTube Channel.

There are many interesting things going on in the running order this year. Are they clues? Quite certainly Christer Björkman has a finger or two in this pie. Why would he put a song like this first of all in the semi? It is nice and a good opener but lacks any kind of personality or temper or anything to make it stand out in a semi as strong as this. Is this the year when Azerbaijan falls out already in the semi?

Qualifier:
I wouldn't bet my house on it.

Somebody could write a scientific essay on when Iceland lost their mojo in this contest. Was it when Yohanna managed to take something sweet and inoffensive and turn it into a silver medal in Moscow 2009? After last year's attempt at edge, Iceland is back at the sweet and inoffensive. Young Ari is a good singer and an adorable personality but this song is so terribly clichéd and dated that it defies description. And the lyrics is just the final kiss of death.

Qualifier:
No. The most likely contender to end last in the entire semi.

Albania does a whole lot of things right. They stay true to their own selves, they keep sending songs that say something about the local music scene performed by local stars. And yet they have struggled to make an impact lately. This song is less complicated and more accessible than recent efforts and Eugent delivers the goods like he really means whatever he is singing. Had this been drawn into the weaker second semi instead, it could really have stood a chance.

Qualifier:
No. There are too many good songs fighting it out for only ten spots. Rotten luck but that's the rules of the game.

04. BELGIUM
Sennek / A Matter Of Time

After three consecutive killer songs from Wallonia, also Flanders woke up and copied the winning concept of their countrymen: sniff out some fresh talent and give them more or less complete liberty to create a compelling entry. And would you believe it - it works also across the linguistic border. Rather Bond-esque (a bit of a trend this year) and most compelling, performed by an intriguing singer.

Qualifier:
Yes. This must qualify or everyone must resign.

The first time I heard this song I thought it was really super annoying. There is a fine line between being annoying and entertaining, it seems. Dumb but irresistibly catchy, performed by someone who knows exactly what it takes to make a package like this work. My only regret is that the camel is not allowed on stage.

Qualifier:
Yes. You bet. And for the first time, Czech republic could make it into the higher regions of the top ten too.

One thing is certain - you never know in advance what sort of song Lithuania will come up with. This one is the most sincere and tender thing they have entered in a long time, sung in a delicate way by a very likeable singer. The kind of entry that would really deserve to get rewarded big time.

Qualifier:
No. I'm afraid not. Had this one been drawn in the second half, then maybe. Now it will be too intimate too early on in the running order and get forgotten. Unless the juries absolutely adore it and save it.

40 years after Izhar Cohen and 20 years after Dana International - wouldn't it be nice if Israel won the contest with something surprising again? Netta is a real personality with a strong and personable voice and the chicken clucking gimmick is sheer brilliance. However, this entry is also sure to be very divisive. How well with it click with a mainstream audience in the end?

Qualifier:
Oh yes. That's hardly a problem. The question is how far this craziness will go in the final.

More than one has described the first semi in Lisbon as a "blood bath". Colourful metaphor and all, but many of the songs lined up would have stood a better chance in the second semi. Like Belarus, whose pop song is quite good - despite the fact that it breaks the rules and should be disqualified - but maybe not good enough to break through. The new edit does it no favours and it had been nice had Alekseev been able to sing it properly live.

Qualifier:
Borderline but my gut feeling tells me this one will be out by quite a slim margin.

What a relief when somebody is finally doing proper opera singing at Eurovision. No funny games, no pop verses, no funny hats. Elina is just singing her modern aria beautifully and gracefully. Regardless if she can keep the dress projections from the national final or not, this is an oasis of class and style.

Qualifier:
It does run the risk of being the Blackbird of the year, but I do think Estonia is back in the final with this one.

Bulgaria came back to the ESC transformed into a nation of modern and compelling pop and they stay true to form also this year. Bones is perhaps more complicated and less instant and a more risky choice. Applause for anyone not willing to just play it safe!

Qualifier:
Yes, most certainly. This is maybe not winning material like last year, but getting to the final should be a walk in the park.