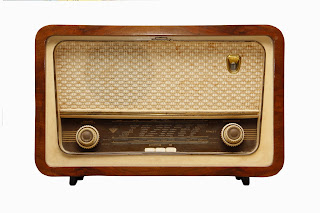 Today it was back to work and I found myself sitting in a café, finishing some texts that really needed finishing, and listened to this year's Eurovision final on radio.

First I listened to the Norwegian radio broadcast, then to the BBC radio broadcast. Just to compare. And hear the songs twice. Then I decided I want to be a radio commentator when I grow up.

I actually have been a radio commentator twice - in 2009 and 2010 my tv commentary was simulcast on radio - but that's not the same thing as my script was meant for the people who could see for themselves what happened on screen.

Radio commentators are cooler, can allow themselves softer voices, don't have to care about the images shown to the audience. Instead they can paint their own picture of what is coming up, what it looks like, what to expect.

I am also much more aware of the entries. I suddenly know exactly who sang well and who didn't. I heard new instrument in the orchestrations. It is baffling how much the images distract from what you hear. Despite being a show designed for television, hearing Eurovision on radio only adds new dimensions to the experience.

Not too long ago, the juries were only allowed to hear - not see - the dress rehearsal. They got an audio tape, listened a few times, then watched the performances on the live show after already being familiar with the songs. I am not saying we should go back to that but it would most certainly make for pretty different points being given.
Posted by TobsonHelsinki at 23:03