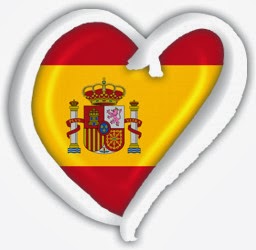 On Saturday, Spain will select their entry for Copenhagen in a televised final consisting of five songs, judged by a panel of experts as well as the televoting audiences.

Spain has been a bit erratic - to put things mildly - for the last ten years at Eurovision. The success of using talent show Operación Triunfo as a vehicle to select for the ESC seemingly left RTVE clueless and only one Spanish entry has made top ten since.

Selecting Pastora Soler internally in 2012 and then let the audience decide what song she should sing in Baku turned out to be a good idea but last year the same formula failed big time for ESDM who ended in the very last place in Malmö with "Contigo hasta el final".

In a surprising move - Spanish tv was always full of surprises, but still - it was decided to put on a real national final with several performers and the names in the final line-up are not all bad.

The songs are not bad either. A lot will depend on the live performances and I get the feeling that the Spaniards will select a style rather than a song in the end. All songs are stronger than your average Spanish entry lately but none of them really stands out.

1. BREQUETTE - Más
Another big ballad - a not too distant relative to Pastora's "Quédate conmigo", written by the same team - with plenty of room for a big voice. Competent but perhaps a little too expected and a little bit too heard before, especially as a similar formula failed for Georgia last year.
Grade: 3/5

2. LA DAMA - Estrella fugaz
A lightweight but enjoyable attempt in the dance genre with more than a nod at "Euphoria", at least production-wise.
Grade: 3/5

3. RUTH LORENZO - Dancing In The Rain
The one the eurofans talk about the most, due to Ruth voicing her desire to represent Spain at Eurovision many months ago. The song is an elegant ballad effort, and perhaps the most original song in the line-up albeit not as instant as I would have expected.
Grade: 3/5

4. JORGE GONZÁLEZ - Aunque se acabe el mundo
A more uptempo pop number with a light almost schlager-esque feel to it. Pleasant and inoffensive but perhaps the song that leaves the least of an impression of the lot.
Grade: 2/5

5. RAÚL - Seguir sin ti
The traditional latin male belter of a song would be a safe but predictable choice and would probably run the risk of not being distinct enough to convince a european audience come May. The boy can sing but we all heard this tune before.
Grade: 2/5

Tobson predicts: It seems to be open goal for one of the ladies and even if La Dama was the one that kept ringing in my head after one listening, I think Ruth Lorenzo would be the best choice. Brequette has a good voice but an overly tried formula while La Dama rings too many Euphoria bells for comfort.

Tobson adds: My grades may seem low but either one of the girls could easily improve by giving a strong live performance.

You can listen to the final versions of the songs at the RTVE website.
Posted by TobsonHelsinki at 20:54